Ranginui & Papatuanuku the sky father and the earth mother
fell in love in a warm embrace. But their seven children all male, lived
in their mother’s womb where it was very warm but very dark. They
wounded how it would feel like to live in the light. So they plan to spread
their father and mother. When Ranginui and papatuanuku fell asleep they
all porsche where father and mother away from each other and finally they
were spread. And they were happy to be in the sunlight but sad for where
father and mother. Papatuanuku was very upset and crying sad tears wishing
that he could be together with her and Ranginui was sad missing
Papatuanuku. So when it rains we known that Papatuanuku is cry. 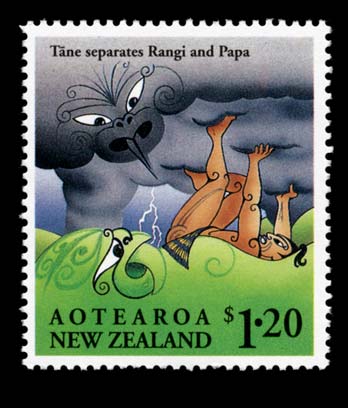 The seven fish of Matariki BY Fine

Today I finish off a task by using Pixiton!!
This week me and my class are learning about Matariki and Matariki story to tell our whanau. This is what I did by using Pixiton.
Please feel free to give me feedback on my work. 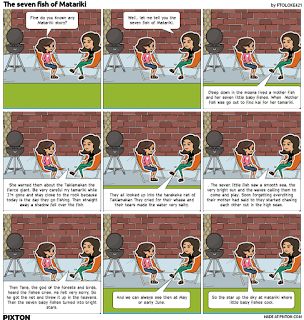 How do people celebrate Matariki? BY FINE

How do people celebrate Matariki?

Whanau gathering- This is a time when extended whanau get together to celebrate
the beginning of the Maori new year.

Preparing Matariki Breakfast - People get up early in the morning before the sun rises.
And make lots of food for their whanau and look up at the stars.

Harvesting crops - It is a time when you get ripe crops in the field and grow new crops.

Fishing - It is a time to fish and cook it for you and your big whanau and eat it under
the night sky.

Narrating Legereds - It’s also a time to tell the little ones a Matariki legends.

Pepe rama - These are paper lanterns that are flown in the sky at night. These are
flown for their ancestors who had passed away. People also go to where graves to
put food and flowers.

Email ThisBlogThis!Share to TwitterShare to FacebookShare to Pinterest
Labels: 2019, fine How do people celebrate Matariki?, year 6

MY ANZAC RECOUNT BY FINE

Today our school sat on the concrete to commemorate
ANZAC day. Each class had presented something to
represent the people who had died in the war. Our class
had mabe Poppies so we can put it on the memorial.
When we got outside the flag we all sat down next to
the memorial. When the ceremony begins we first
started with the New Zealand national anthem then
the Australia national anthem. Then our deputy
principal Mr. Reddy played the beagle and we all
Standed Street. When we all had a Time to think
about the Soldiers who had  Sacrifice themself. Then
we had Room 1 to Present there item, The item there
class present was what ANZAC means by the spelling.
And in the end our principal saying a little speech. My
favourite item out of all is Room 8 ANZAC work.
Lest we forget. Today I finish off a task by using Pixiton!!
This week me and my class are learning about Matariki. This is what I did by using Pixiton. Please feel free to give me feedback on my work. 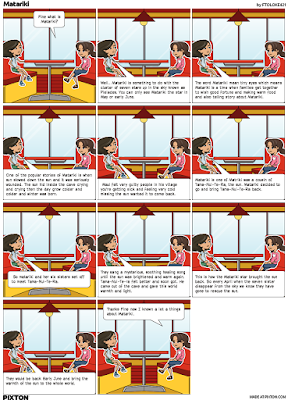 Today I have finished off a task by using Pixiton ! My class has been learning about Endangered Animals, I picked a polar bear since I love looking at soft fur (even though it black in the inside). This is what I did by using Pixiton. 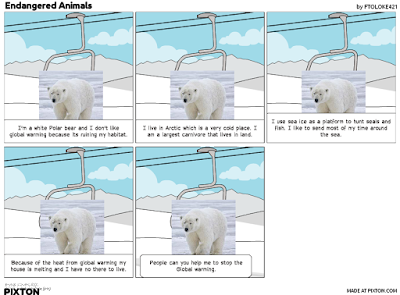 The seven fish of Matariki

The seven fish of Matariki

Deep down in the moana lived a mother fish and her seven little baby fishes.
When  Mother fish was go out to find kai for her tamariki. She warned them about
the Tataraimaka the fierce giant. Kia tupato ( Be very careful) my tamariki while
I’m gone and stay close to the rock because today is the day they go fishing.
Then straight away a shadow fell over the fish. They all looked up into the harakeke
net of Tataraimaka. They cried for their whaea and their tears made the water very
salty. The seven little fish saw a smooth sea, the very bright sun and the waves
calling them to come and play. Soon forgetting everything their mother had said
to they started chasing each other out in the high seas. Then Tane, the god of the
forests and birds, heard the fishes cries. He felt very sorry, So he got the net and
threw it up in the heavens. Then the seven baby fishes turned into bright stars. And
we can always see then at May or early June. 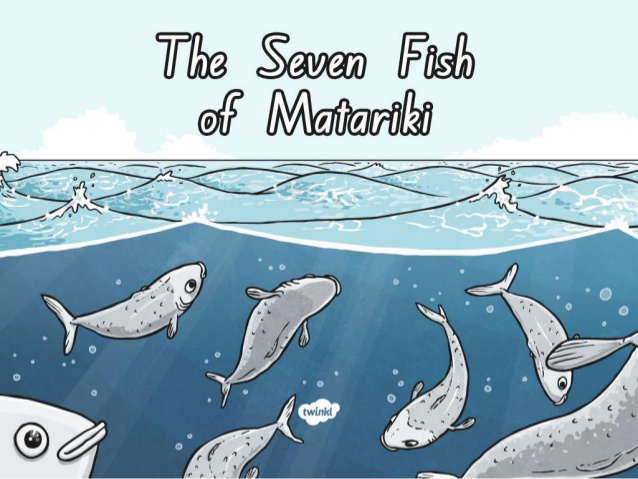 Email ThisBlogThis!Share to TwitterShare to FacebookShare to Pinterest
Labels: 2019, inquiry, The seven fish of Matariki, year 6

Why are polar bears endangered?

Why are polar bears endangered?


Polar bears are endangered because of global warming. The heat from global warming is heating up the all the ice and it’s very hard for the polar bears to Survival. Where is only 22,00o to 31,000 left on earth. Polar bear  lived in the Arctic Circle Canada, Russia, the United States in Alaska, Greenland and Norway.

Email ThisBlogThis!Share to TwitterShare to FacebookShare to Pinterest
Labels: 2019, inquiry, Why are polar bears endangered?, year 6

Matariki is something to do with the cluster of seven stars up in the sky known as
Pleiades Matariki is celebrated for 15 days. You can only see Matariki the star in
May or early June. The word Matariki mean tiny eyes which means Matariki is a
time when families get together to wish good fortune and making warm food and
also telling story about Matariki. One of the popular stories of Matariki is when sun
slowed down the sun and it was seriously wounded.

The sun hid inside the cave crying and crying then the day grow colder and colder
and winter was born. Maui felt very guilty people in his village you’re getting sick and
feeling very cold missing the sun wanted it to come back. Matariki is one of Matriki was
a cousin of Tama-Nui-Te-Ra,
the sun. Matariki decided to go and bring Tama-Nui-Te-Ra back.
So matariki and her six sisters set off to meet Tama-Nui-Te-Ra.
They sang a mysterious, soothing healing song until the sun was brightened and
warm again. Tama-Nui-Te-ra felt better and soon got. He came out of the cave and
gave this world warmth and light. This is how the Matariki star brought the sun back.
So every April when the seven sister disappear from the sky we know they have gone
to rescue the sun. They would be back Early June and bring the warmth of the sun to
the whole world. 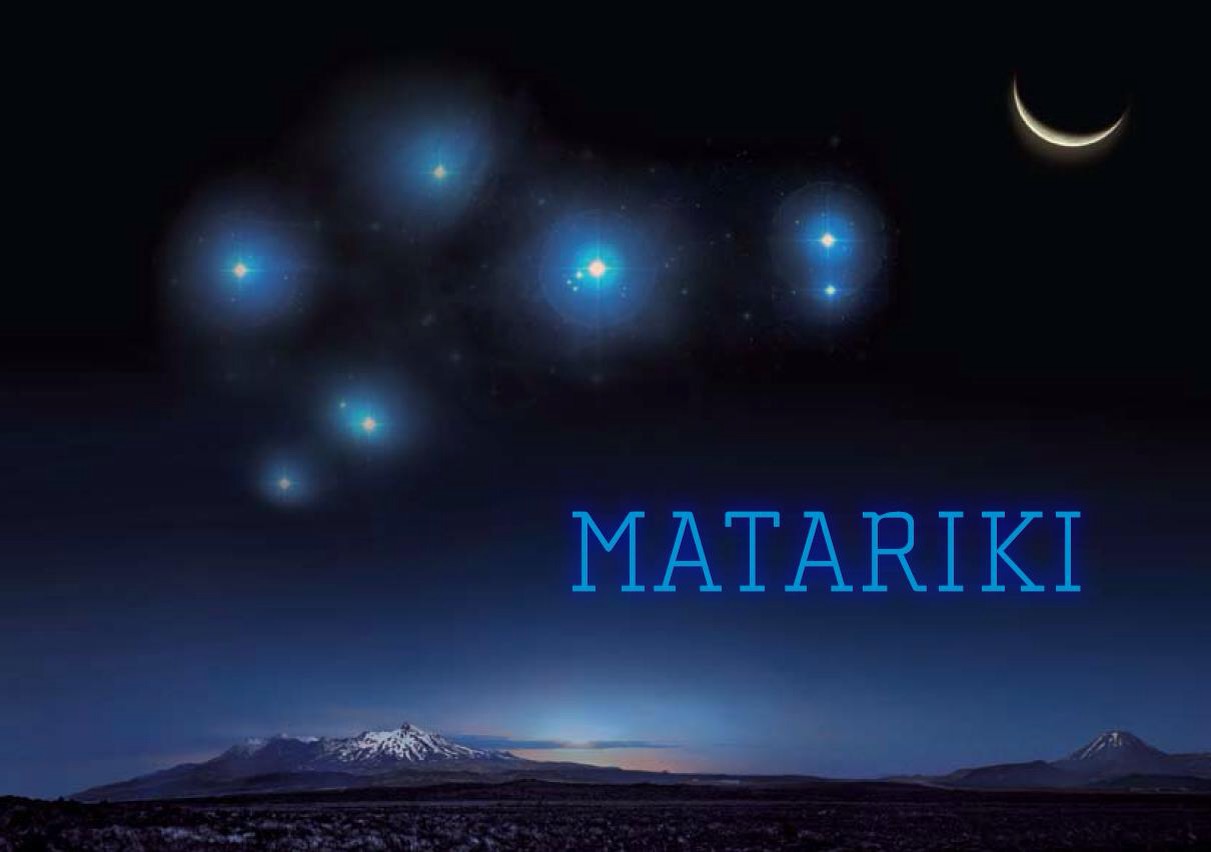 Email ThisBlogThis!Share to TwitterShare to FacebookShare to Pinterest
Labels: 2019, What is Matariki?, year 6

Email ThisBlogThis!Share to TwitterShare to FacebookShare to Pinterest
Labels: 2019, Classification of animals, year 6

Malo e lelei, Kia orana and welcome back to my blog. Todays blog to about the new words that me and my class learned. Hope you enjoy: )
By Fine at 12:12 PM No comments:

How Maui found the secret of fire.

Malo e lelei, Kia orana and welcome back to my blog!!

On my last blog I blogged about my Pixton work on when women were allowed to vote and today went back on Pixton and write How Maui found the secret of fire. 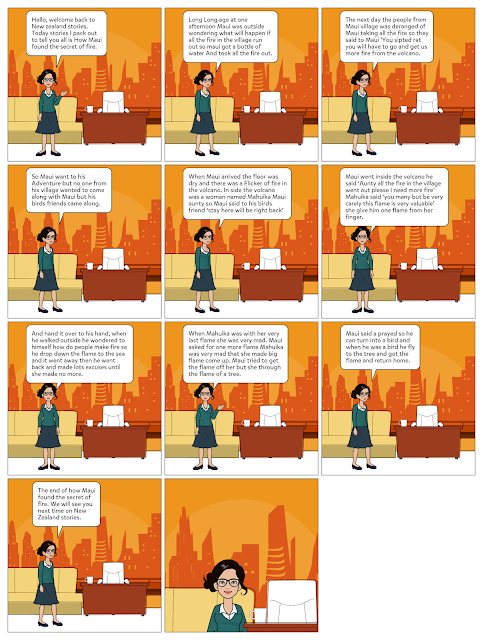 Email ThisBlogThis!Share to TwitterShare to FacebookShare to Pinterest
Labels: 2019, how Maui found the secret of fire, year 6

Pixton - When women were allowed to vote.

Malo e lelei, Kia orana and welcome back to my blog!!
Today I learned how to use Pixton and I very enjoy use it!!
Here is my work on when women were allowed to vote : ) 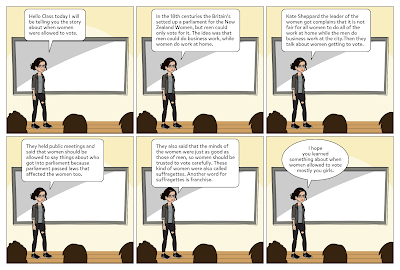 Here is a link to Pixton

Email ThisBlogThis!Share to TwitterShare to FacebookShare to Pinterest
Labels: 2019, Pixton - When women were allowed to vote., year 6

Malo e lelei and welcome back to my blog!!
I readed the story on Finders keepers and I retell that story with my own words I hope you all enjoy this: ) 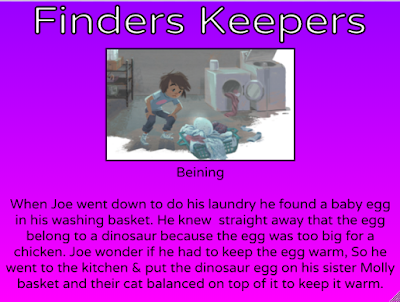 Thank you for read my work & Please feel free to give you feedback✌😇
See you next time a blog!!
By Fine at 8:28 PM No comments:

When women were allowed to vote!!

Malo e lelei, Kia Orana, Bonjour, Talofa lava, Aloha and welcome back to my blog!!
This Term my class learned about the New Zealand
History!!
Me and my friend Htoo say wah write about When
Women were allowed to vote.

When Women were allowed to vote - When did this started? On the 19 of September 1893.
In the 18th centuries the Britain's setted up a parliament for the New Zealand Women, but men could only vote for it. The idea was that men could do business work, while women do work at home.
Kate Sheppard the leader of the women got complains that it is not fair for all women to do all of the work at home while the men do business work at the city.
Then they talk about women getting to vote. They held public meetings and said that woman should be allowed to say things about who got into parliament because parliament passed laws that affected the women too.
They also said that the minds of the women were just as good as those of men, so women should be trusted to vote carefully. These kind of women were also called suffragettes. Another word for suffragettes is franchise. She is also on the New Zealand 10 dollar note.

Email ThisBlogThis!Share to TwitterShare to FacebookShare to Pinterest
Labels: 2019, When women were allowed to vote!! ✌✌😇, year 6

Malo e lelei, Kia Orana, Bonjour, Talofa lava,
Aloha and welcome back to my blog!!
This week was samoa language week and at
Tamaki primary school to celebrate that culture
we had a big assembly on Friday !!
Each class had a item to present up on stage
me and my class and also room 11 singed a
song about Butterfly called O Le Pepe
(This is the Linked to the song)
But for the class they did a samoan dance or
the samoan haka!!

It was so amazing & cool seeing all the different
performance from each class!! 😎😎

I hope you all ENJOY😇 my work and happy
samoan language week to everyone!!
See you next time a blog!!
Feel free to give me feedback on my work!!✌✌😄😄